Diego on the River

Do you like unusual things? Have you visited unusual places? I’m not sure if I like to be surprised — or shocked — by unexpected things and places. Not all the time, anyway. Once in a while, maybe. What about you?

What about your church location? Is your church in an urban area, in the countryside, or by the ocean or river? Is there anything unusual or interesting about where your church was built?

In the Bible, Jesus preached in the cities, in towns, on the mountainside, by the sea, and from a boat…

“The same day went Jesus out of the house, and sat by the sea side. And great multitudes were gathered together unto him, so that he went into a ship, and sat; and the whole multitude stood on the shore. And he spake many things unto them in parables…” (Matthew 13:1-3a)

The above verse is from the KJV Bible. In the New King James translation, we might see “boat” instead of “ship.”

Our Lord Jesus Christ preached a sermon from a boat to His congregation on the shore of the Sea of Galilee.

When I remembered the scriptural passage, letting my Savannah Sweethearts characters come and go through Riverside Chapel, a riverboat church docked on the old Savannah River at the city waterfront didn’t seem that unusual, after all.

My Savannah Sweethearts collection follows the lives of eleven couples who live in the coastal city of Savannah or on the nearby shores of Tybee Island by the Atlantic Ocean.

After the Ask You Later prequel, set a year before, Savannah Sweethearts really begins in Know You More, where we find Pastor Diego Flores, young, single, and serving God in a church on a riverboat… Diego has all he can handle, but there’s more. 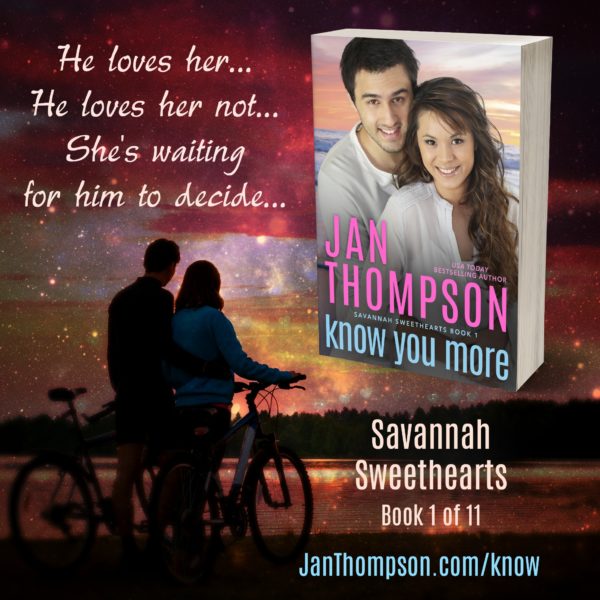 Diego Flores has been interested in his best friend’s younger sister since their college days, but his calling to pastor Riverside Chapel in Savannah takes up most of his time.

When Heidi Wei becomes his strongest supporter in his church growth ministry, how does Diego show his feelings for her without giving her the wrong idea? Does she see him as potential husband material or just the pastor of their church?

Heidi suspects that Diego is sweet on her, but he seems to believe that his divine calling prevents him from acting on it. If it isn’t meant to be, she’s not going to push for it. Yet every time they are together, something happens between them. Have they moved beyond the platonic relationship they have enjoyed all these years to something more personal?

When a crisis hits Heidi’s family, Diego has to balance pastoring his congregation and ministering to Heidi without losing either one. Being in love while growing a small church is difficult for him to juggle. Which path is more important? Which one should he focus on?

Know You More (Savannah Sweethearts Book 1) is available on these online retailers:

Yes, Diego has his work cut out for him. However, he has a supportive church, in spite of their busy transition to a new location. Speaking of location, let’s go back to our original question. Is there anything unusual or interesting about where your church was built?

Have a wonderful day in the Lord!