Do you have a scar that you consider unsightly, something you would hide from the world? A physical scar, perhaps? An emotional scar? Both?

In one of my Savannah Sweethearts books, Sabine Hu has both physical and emotional scars. Three years ago, she was in a car wreck that killed another passenger, crushed her legs, and destroyed her modeling career. After many surgeries and recoveries from those operations, Sabine has finally gotten back parts of her functional life. She has come to the point of no longer needing a cane to walk.

Is she bitter? After all, Sabine was only one of the passengers in the vehicle, with her private investigator sister at the wheel. Sabine was not at fault. But she bore the most pain for it, while her sister walked away unscathed.

Nonetheless, for three years, Sabine hasn’t worn shorts or knee-length skirts in public. She had almost always worn long pants or ankle-length skirts, all in her attempts to hide the scars up and down her once-gorgeous legs. She expects to hide her legs for the rest of her life.

Sabine’s assumption is that she has adjusted to her situation in life. Little does she know that her heart needs a bit more healing. In this case, it’s not a matter of whether she wears modest clothes to hide her disfigured legs, but a matter of her own acceptance of what God has allowed in her life, and to be bravely unashamed of her scars.

Sometimes God uses circumstances to deliver us and take us to the next step in life.

That is one of the undercurrents of Savannah Sweethearts Book 2. While the storyline itself is not about Sabine’s scars per se, it is through her daily job as a real estate agent and her new encounters with her sister’s business associate, Aidan Ming Wei, that God works in Sabine’s heart to empower her to overcome her emotional shame.

Do you let God deliver you from your scars?

“Not that I speak in respect of want: for I have learned, in whatsoever state I am, therewith to be content” (Philippians 4:11). 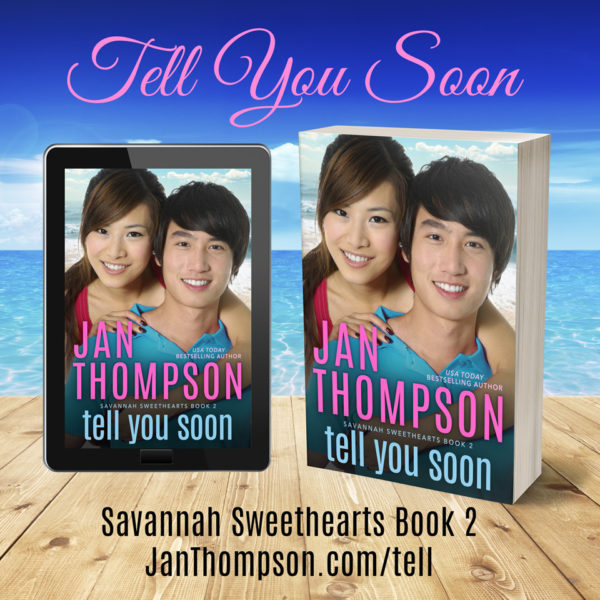 A Christian beach romance with suspense, TELL YOU SOON is book 2 in my Savannah Sweethearts series of sweet, clean, and wholesome multiethnic contemporary Christian romances celebrating faith, hope, and love in Jesus Christ.

Sabine Hu’s legs were crushed in an auto accident three years ago, ending her modeling career. Today she walks without a cane, is back in heels, and has found a new job as a real estate agent selling houses in Savannah and on Tybee Island. She keeps to herself and stays in the background, unlike her high-profile sister, Helen, whose fame as a private investigator is constantly in the news.

Private Investigator Aidan Ming Wei works with Sabine’s sister, but he’s interested in getting to know Sabine better. He thinks he can draw her out of her shell. Since he has hired Sabine to sell his house by the Atlantic Ocean, he has all sorts of excuses to spend time with her. She seems to be at ease around him, and they get along well. However, spending time with her is exactly what would put her life in danger, and Ming risks losing Sabine forever…

TELL YOU SOON (Savannah Sweethearts Book 2) is available at these online retailers: